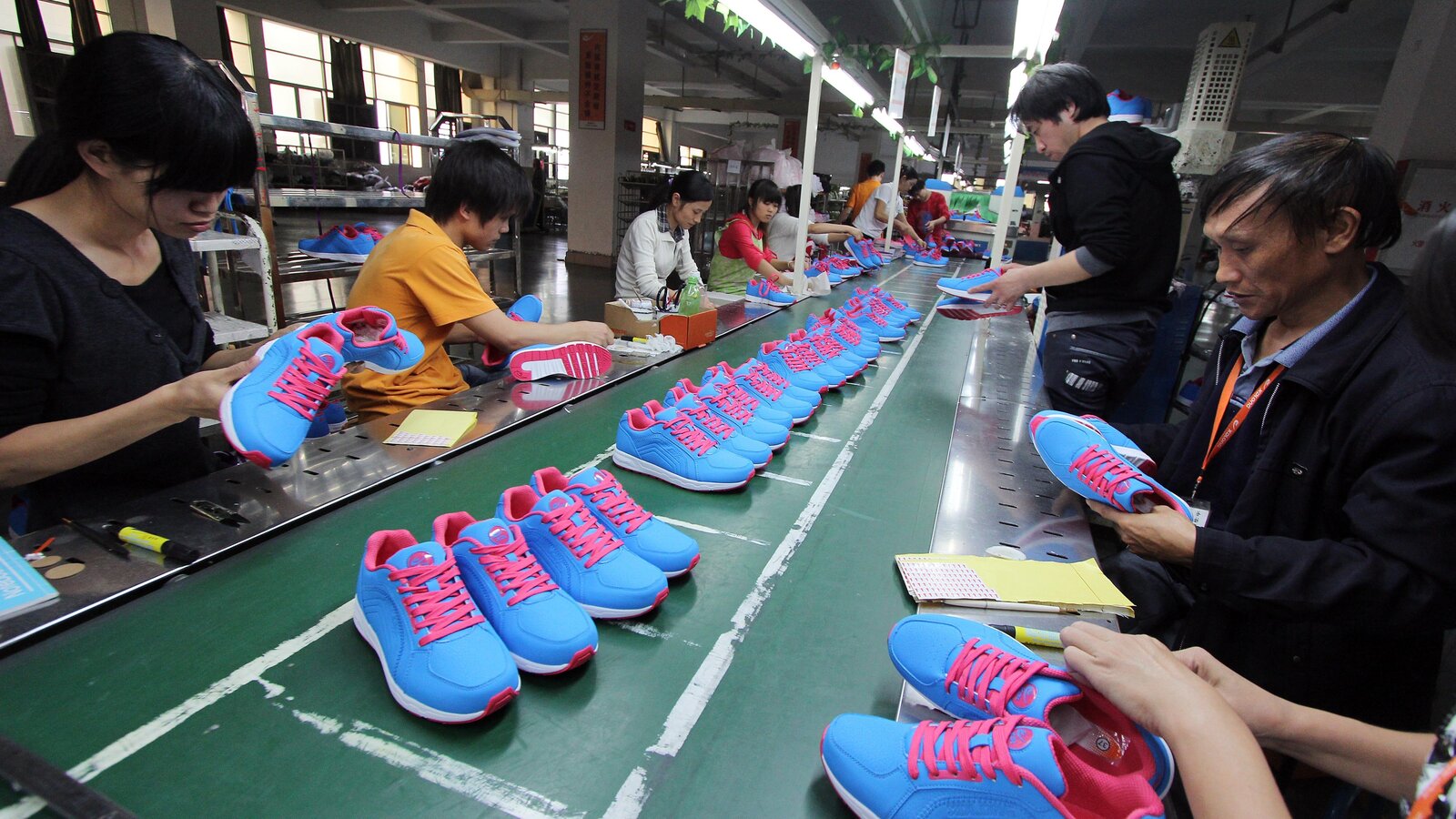 Workers makes shoes at a factory in Jinjiang, in southeast China's Fujian province. Nearly all shoes sold in the U.S. are foreign-made. China's share has declined, but it's still a major source.

For Douglas Clark, the darkest part of working for Nike in the 1980s was watching American shoe manufacturing "evaporate" in the Northeast in a mass exodus to Asia in pursuit of cheaper labor.

"As a true Yankee — and my father was a Colonial historian — you know, it was heartbreaking," he said.

Clark would go on to a long career in footwear, at Converse, Reebok, Timberland, then his own line of shoes at New England Footwear. And there, he would devote eight years to one mission: creating a model to make shoemaking in America profitable again.

This was a tall order. At a time when President Trump speaks of rebuilding American manufacturing, footwear is a telling example of how hard it is to turn back time.

These days, 99% of shoes sold in the U.S. are imported, many of them from China, Vietnam and Indonesia. China's share has declined in recent years, but it remains a key source of America's shoes and shoe parts. That's why some U.S. footwear companies have been loud opponents of Trump's threat of more tariffs for almost everything imported from China.

For a shoe-factory job paying $12 an hour, the actual cost of shoemaking — when adding benefits — grows to $16 an hour, compared with about $3 an hour in China, said Mike Jeppesen, head of global operations at Wolverine Worldwide, which owns brands like Merrell, Sperry and Keds. And that cost quadruples after wholesale and retail markups, he said, ballooning into a $50 price difference between a pair made in the U.S. versus in China.

"There's really very little commercial reason for why you would make footwear in the U.S. today," Jeppesen said. He acknowledges one exception to that: factories that work to meet constant demand for American-made shoes by the U.S. military.

Indeed, many of the remaining 200-some U.S. footwear factories serve the military, said Tom Capps, whose Capps Shoe Co. in Virginia mainly makes uniform shoes for the government.

Capps said he employs 125 to 175 workers, depending on the factory's workload. That's on the high end for an industry where most firms employ fewer than 10 people, according to the Footwear Distributors and Retailers of America.


Owners of U.S. factories that make nonmilitary shoes in America said they found their own reasons to stay. Many cited their love of the craft and tradition. Capps said he also found a niche by offering a large selection of sizes. Olivier Marchal, of Sense of Motion Footwear in Colorado, worried about the environmental impact of shipping shoes and materials from across the world in Asia.

New Balance is known for still making or at least assembling some sneakers in the U.S. But the company gets "some components for our domestic manufacturing from China, as well as other countries, due to a limited U.S. supply chain," executive Monica Gorman told U.S. trade officials on Monday.

As shoemaking jobs disappeared, so did the support network for the industry. Suppliers of things like the little metal eyelets and colorful leather followed the industry overseas. Many shoe factories turned into warehouses and offices. 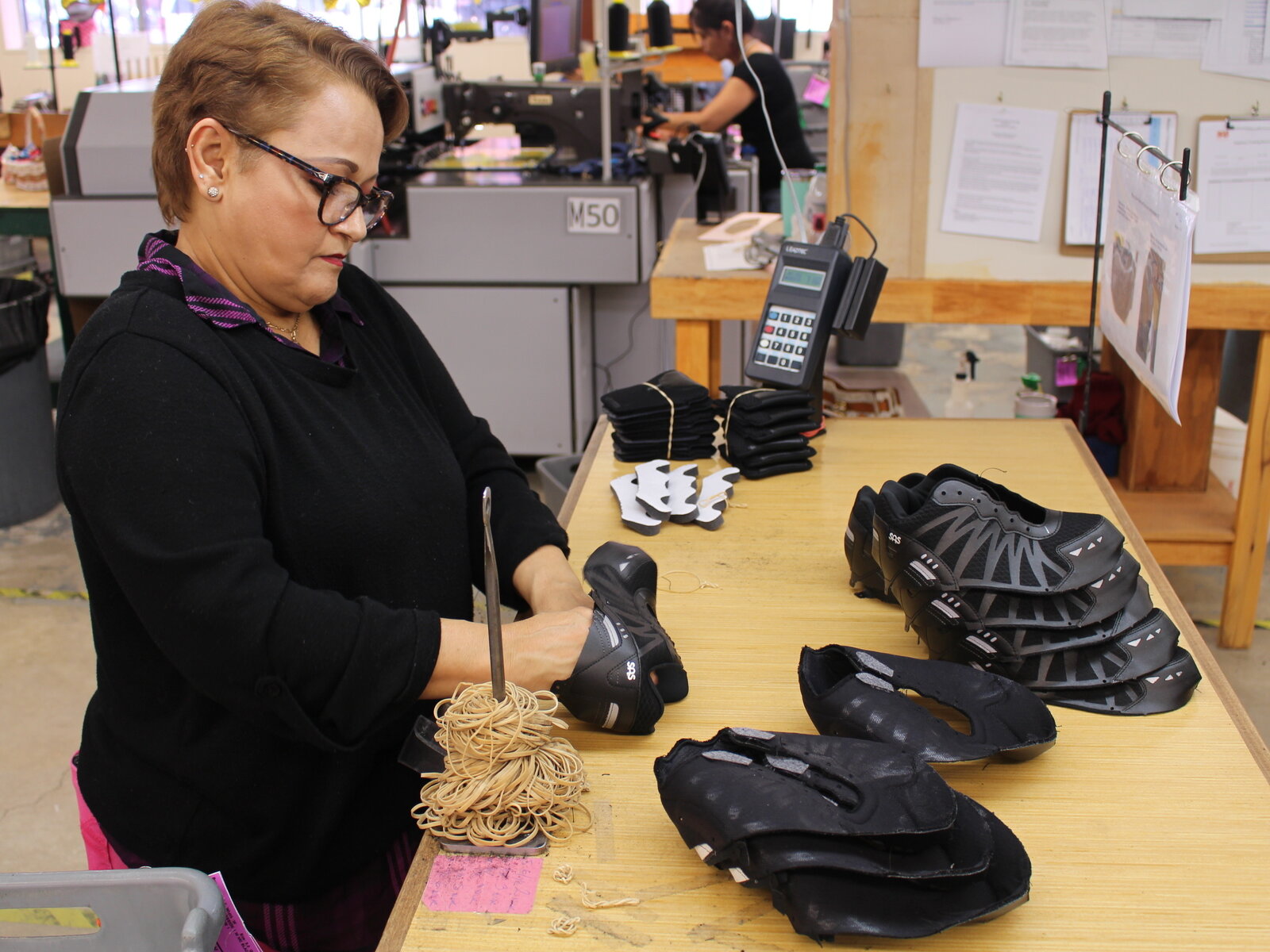 San Antonio Shoemakers has been making shoes in Texas since the 1970s. SAS recently got a big contract to make sneakers for the U.S. military.

Dan Heselton runs Maine Mountain Moccasin out of one such factory that vacated during the exodus.

"We'll post jobs," he said, "and it's very seldom that someone under the age of 40 is coming in the door to apply." Among the workers who remain, arthritis is a common struggle.

"A lot of the people have said multiple times that they definitely don't want their son or daughter doing this," Heselton said. "That's tough to hear."

With the higher costs of U.S. labor and materials, the remaining manufacturers tend to rely on their shoppers choosing to pay more for the "Made in America" brand.

"We know that we can't make a $19 shoe to be sold at Target or Walmart. That's just not going to be possible for us," said Nancy Richardson, CEO of SAS, a midsize company that has been making shoes in San Antonio since the 1970s. "So we focus on having people feel like they get an $800 pair of shoes for $150 or $200."


The mass-market companies, meanwhile, have been turning their U.S. operations more toward design and marketing, leaving all the cutting, gluing and stitching to manufacturers overseas.

Clark wanted to change that. On his mission to return mainstream manufacturing to America, he zeroed in on the cost and complexity of the labor involved in shoemaking.

U.S. factory owners often say they wish people realized just how many parts and processes it takes to make a shoe. There are multiple layers to create the sole alone, including lots of heavy-duty sewing. Securing the bottom of the shoe takes multiple steps. By the time the shoe is ready to wear, dozens of people might have worked on it.

Clark knew about this, and about the U.S. manufacturers' struggles with materials, parts and workers. But he also knew that history was already starting to repeat itself in China. Wages have been going up there. Footwear companies have been moving — yet again — to other countries, chasing lower costs.

This could be the opening for America's comeback, Clark thought. But for it to work, the process had to be simplified — maybe a dozen parts instead of 50 — and more automated. Maybe then, he said, the manufacturing could be "where the markets are, instead of where the labor is."

A few years back, he got a contract with a big brand and a grant to get started. He began with making top parts, or uppers, "that didn't involve a lot of labor," he said.

Even In The Robot Age, Manufacturers Need The Human Touch

Major brands, like Nike and Adidas, have been developing new technologies, including in the U.S. But they still rely heavily on factory workers abroad. Because unlike humans, robots aren't nimble — they can't notice imperfections or quickly switch to a new fashion style.

"Robots are not forgiving," Clark said.

For Clark, the story had a frustrating end. Developing automation got very expensive and progressed more slowly than expected. He was draining his funds and agreed to sell his factory to a technology company, which knew a lot about robots. The factory is now closed.

Clark had signed a noncompete agreement, so now "I'm essentially retired unwillingly," he said. He had hoped his legacy would be reviving American shoe manufacturing. Instead, he is now in real estate.